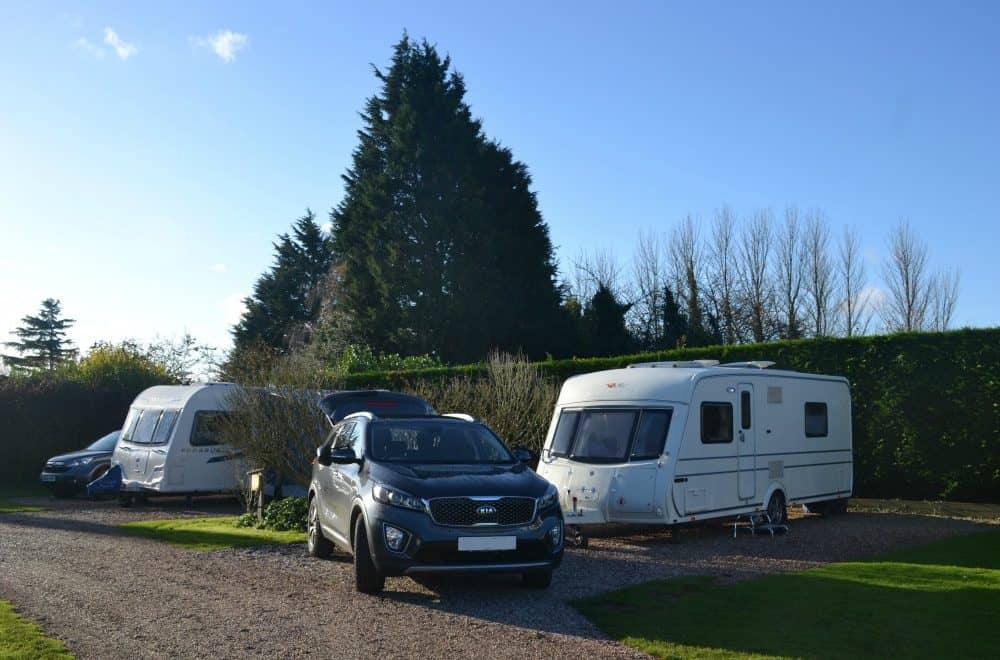 The Tin Box grandparents had a very special anniversary to celebrate last autumn so they booked an equally special holiday – a river cruise down the Danube. I’d love to say we had the time and money to join them, but sadly it was not to be. And I’m pretty sure we would have cramped their style anyway! So instead we booked them up for a weekend away as soon as they got home. Here’s our review of Ross Park Caravan Park – a dog and family-friendly campsite in Devon – where we pitched up with a motorhome and Tin Box.

A Devon campsite open in the low season

From autumn half term the Devon campsite options reduce considerably as many close down outside the main holiday season. But after a bit of digging Tin Box Grandpa booked us into Ross Park Caravan Park near Newton Abbot in South Devon. It was a top find!

Ross Park is a five star dog and family-friendly campsite that only accepts couples and families, and it proved to be a bit of a gem. Here’s our review:

Where is Ross Park Caravan Park?

Ross Park is just down the road from Newton Abbot on the road to Totnes in South Devon. This puts it in a prime location for exploring the English Riviera, Dartmoor National Park, or Exeter. It would also make a convenient stop off on the way to Cornwall as it’s not far off the A38. Just watch the approach to the campsite, which is a tight, up-hill right turn on a narrow road.

The pitches are well-spaced with tidy borders in-between. During the weekend we saw the site staff out cutting grass and pruning back plants ready for the winter. Our Premier pitches came with hard standing, our own water tap, a waste point and 16amp electric hook up. The site also has Deluxe pitches, which are the same just without a waste point, and grass tent pitches with electric hook ups.

It was a bit too nippy to make the trip to the toilet block to use the showers, so we used our own in Tin Box during our weekend stay. However, I couldn’t resist a nosy about. The showers are in a heated block attached to the bar and restaurant near the site entrance. As soon as you walk inside you’re hit by the reassuring smell of citrus bleach. The team at Ross Park certainly don’t drop the ball off-season. The facilities are modern, immaculate and provide well for families. There are at least two family bathrooms with a baby changing table, a baby bath and plenty of room to move around. Hot water is free, as are the hair dryers. 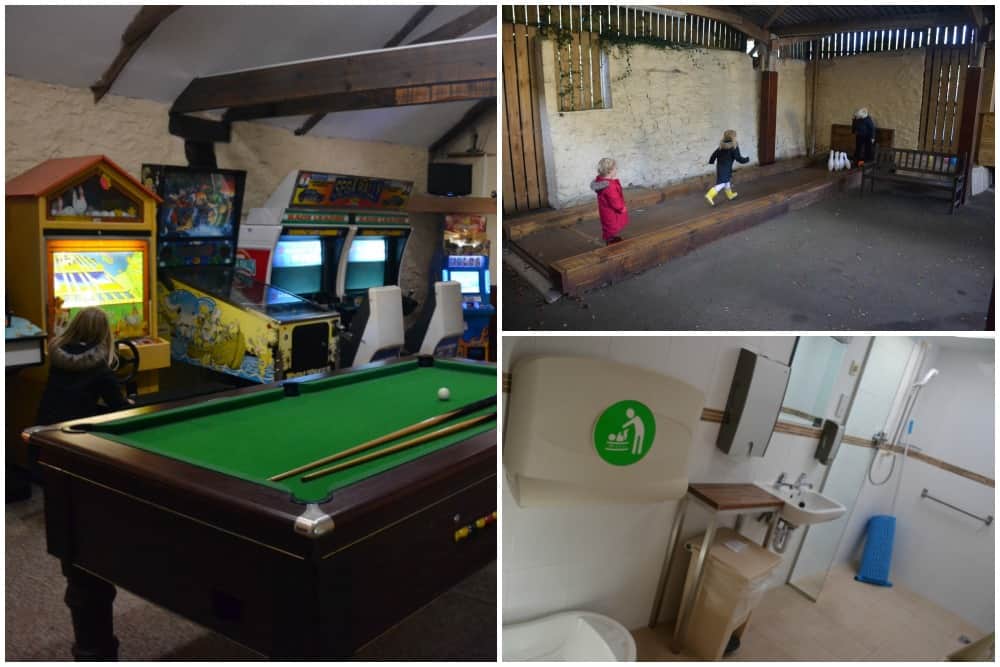 Also located by the bar is an undercover games area. This has skittles, table tennis, and connect four, a laundrette, arcade with pool table, snooker room and a tropical conservatory with plenty of seating. I can imagine this is a very popular spot for families to sit in the evening. Parents can enjoy a drink while the the kids play on the games nearby.

The New Barn Restaurant wasn’t open when we visited. However the Ross Park website says there’s a range of food served as well as Sunday Lunch. There’s also entertainment on Sundays during the peak season. 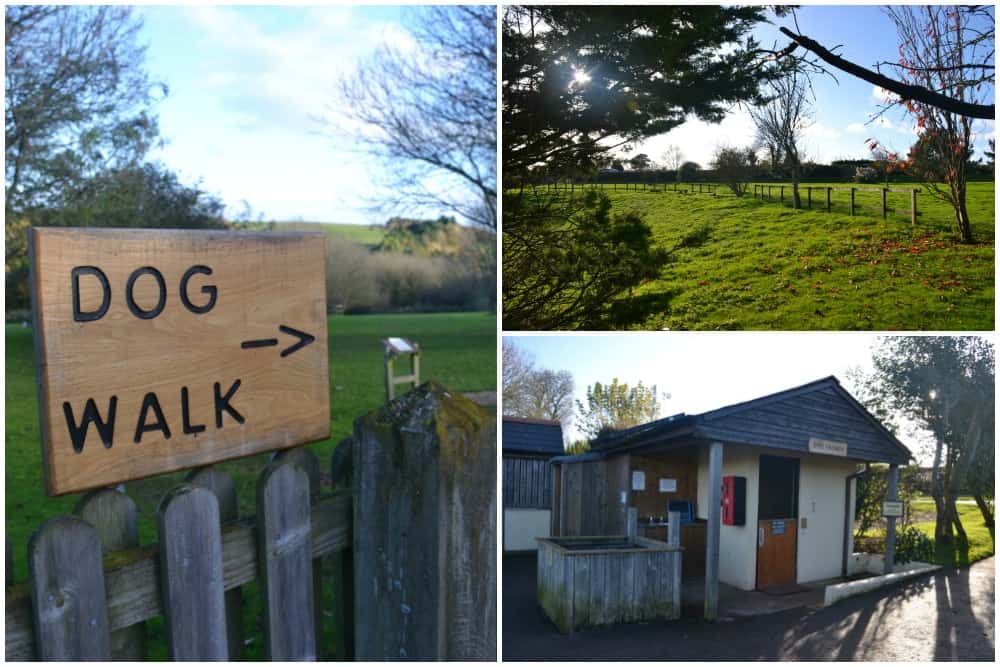 We found great views across Dartmoor from the recreation areas at the far end of the site, and no less than three dog walks. We even found a dog shower that looked better than the human showers we’ve seen on some campsites. Just outside there’s a boot cleaning station, so muddy footwear can be washed before you go back to your van or tent.

The Tin Box girls were impressed with the children’s play area, which had wooden equipment suitable for younger and older kids set in a large field. 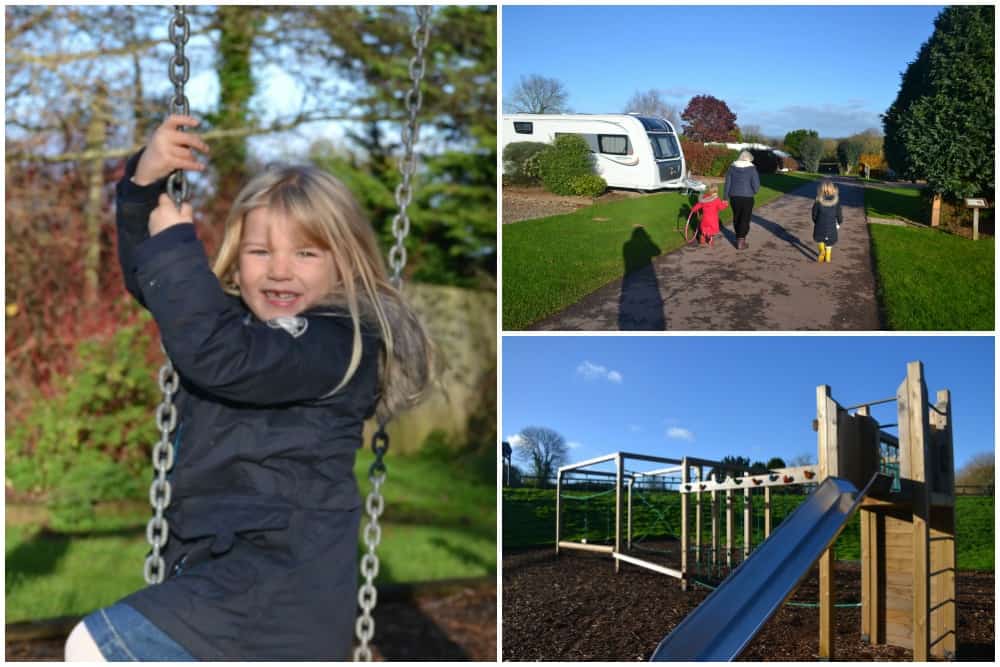 For those interested, the waste and chemical toilet facilities were also well put together.

Things to do around Ross Park

We spent a day exploring close to Ross Park and visited Totnes where we looked around the Norman motte and bailey fortification Totnes Castle. Other fun days out without kids around Totnes include the South Devon Railway, the China Blue ceramic studio, Round Robin steam, boat and train tour, and Totnes Rare Breeds Farm. If you’re looking for somewhere to eat we can also recommend the Royal Seven Stars Hotel. However, you are a bit spoilt for choice in this bohemian foodie town.

You’ll also find plenty of things to do with kids on Dartmoor. Some of our favourite family days out in the National Park are: the Miniature Pony Centre, Canonteign Falls, the Tamar Trails, River Dart Country Park, the Dartmoor Otter Sanctuary, as well as walking.

If you like a slightly quirky day out with a bit of bargain hunting then hit Trago Mills at Newton Abbot where you’ll find small rides, restaurants and shops.

Or if you enjoy the beach you must go to Dawlish and Dawlish Warren. If history and stately homes are more your thing then visit Powderham Castle, which is the seat of the Earls of Devon. The deer park, petting farm and children’s playground will be a hit with kids too.

We would highlighly recommend Ross Park for families with dogs. The facilities and location are excellent for keeping both kids and pets entertained. The park was very quiet during our low season stay but we reckon it would come alive in the main holidays.

Ross Park is open from early March to early January.

Can you recommend any dog and family-friendly caravan sites in Devon? Leave your tips in the comments below! 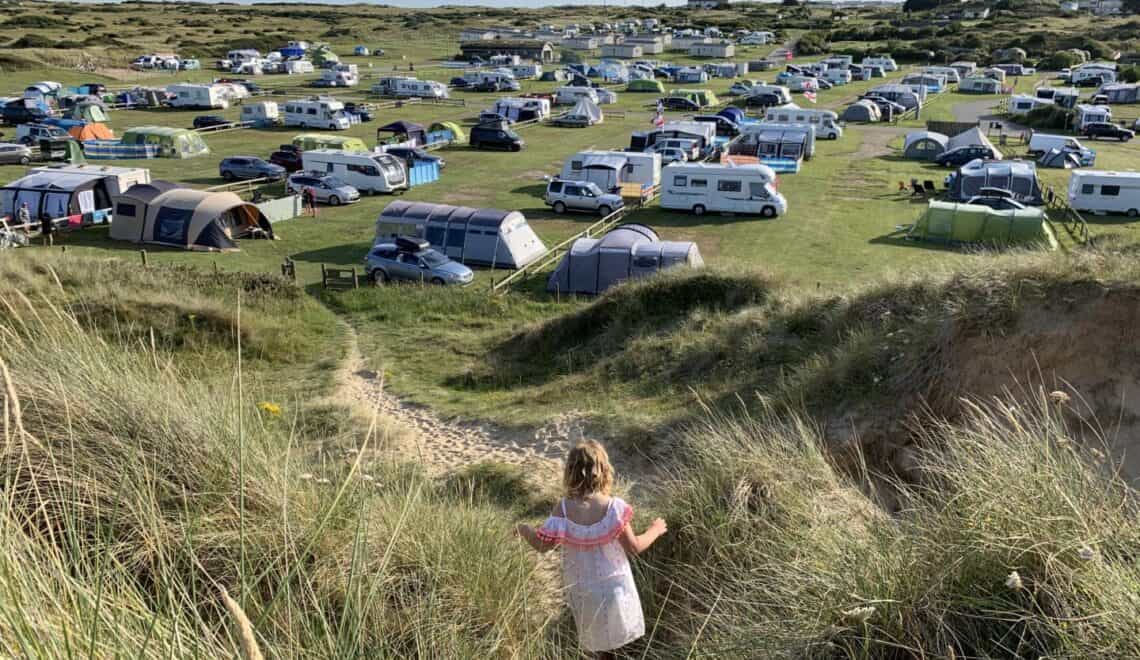