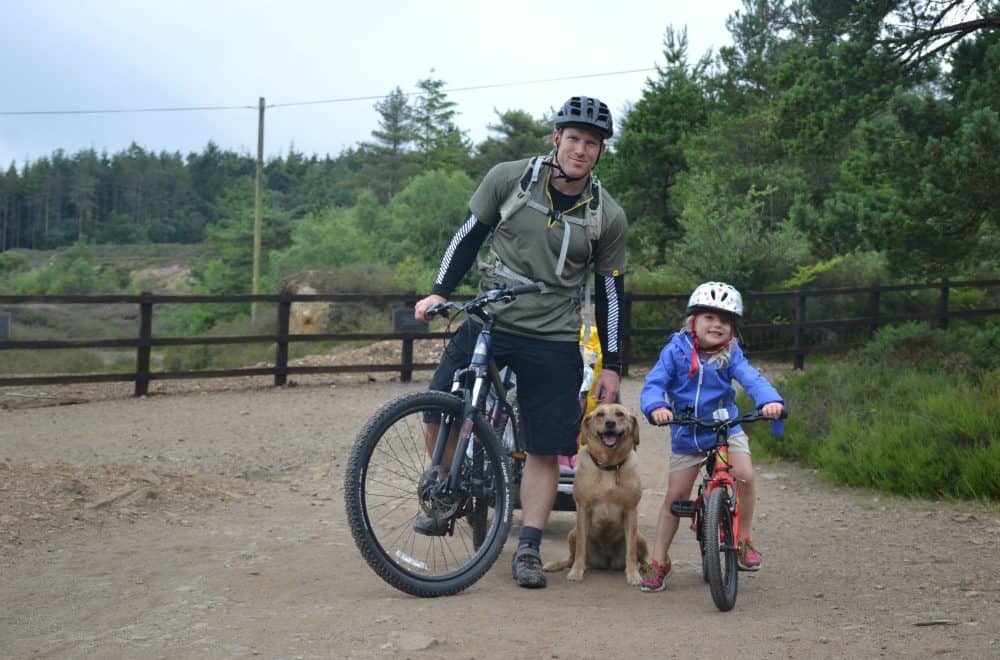 If you’re looking for family cycle routes in Devon then the Tamar Trails are a great day out. We visited during our caravan break at Woodovis Park on Dartmoor and can recommend it as a beautiful place for outdoor fun with kids in Devon.

The 25km of trails around the Tamar Valley are ideal for walking, cycling and running. There’s also other activities that I hope our girls will enjoy in a few years like Tree Surfing – think zip wires and high ropes – canoeing and archery.

What are the Tamar Trails?

The Tamar Trails Centre, from where you can tackle this collection of physical challenges, began to take shape 10 years ago and was opened in 2013. It sits in the middle of an area of Outstanding Natural Beauty and a World Heritage Site on the border with Cornwall in West Devon. The Tamar Valley used to be the home of the global copper mining industry. Much of the landscape has been shaped in the pursuit of minerals. It’s both beautiful and rugged.

We hired a Marin mountain bike and Burley Cub trailer from the Tamar Trails Centre. Mr Tin Box brought his own Cube bike. I ended up riding this because Mr TB’s legs were better equipped for powering up hills with the trailer containing one and sometimes two girls.

Tamar Trails also has hire bikes with 24 inch frames for older children and tag-a-longs suitable for four to six-year-olds.

When we arrived it was a busy Saturday morning, with participants from the weekly Park Run still milling around the cafe, and the first of the Centre’s kids birthday parties being set up. However, we had no problem getting parking at 10am and were introduced to our extra rides quickly. We are also given a map showing us the four different cycle routes and some good advice on which way would be easiest for our youngest rider.

Our cycle route on the Tamar Trails

We decided to take the Mineral Railway Trail north towards the Devon Great Consols Mine where we joined the circular Wheal Maria Trail. The first part of the cycle route was very flat and passed along fields and evergreen forest for 3km. This was the ideal opportunity for me to build up some confidence in the saddle, especially as I was riding Mr Tin Box’s prized Cube. I’m without doubt the least confident cyclist in our family. Even Tin Box Baby has her own balance bike at home.

Tot on the other hand was in her element on her super little Frog Bike. We decided to give her a chance to try the trail on her own bicycle knowing that at some point she’d want to join Baby in the two-seater trailer.

This came when we reached the Wheal Maria Trails, which is a bit more winding, rocky and steep. This part of the route is 3.5km long and navigates around the main copper and arsenic mines of the Devon Great Consols. Yes, that’s right. Arsenic. There are plenty of warning signs to tell you to keep clear of hazardous areas and polluted water. Dogs should be kept on a lead for this part of the trail. 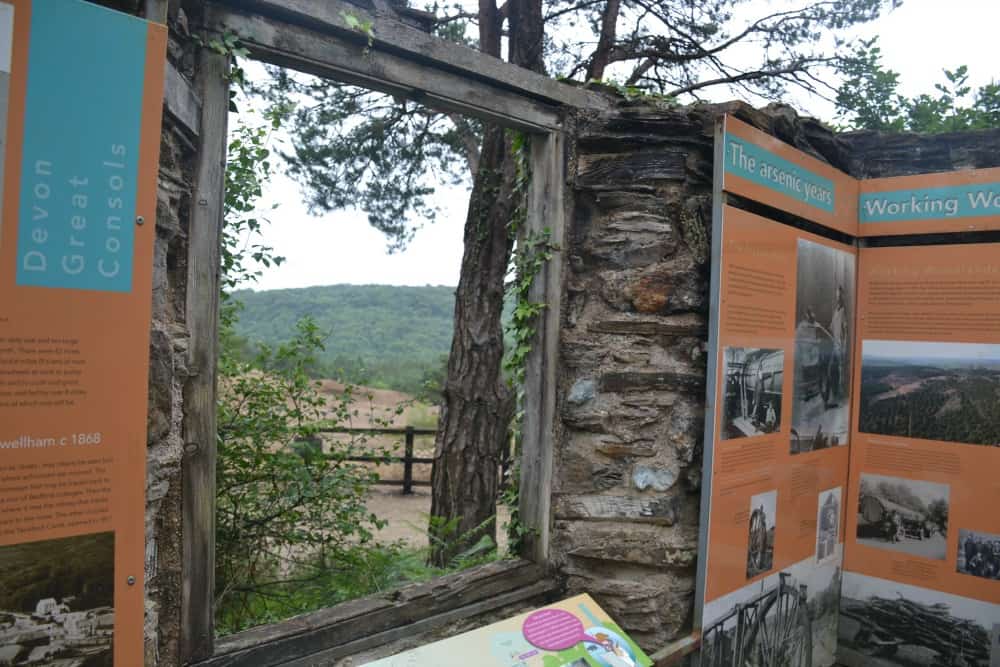 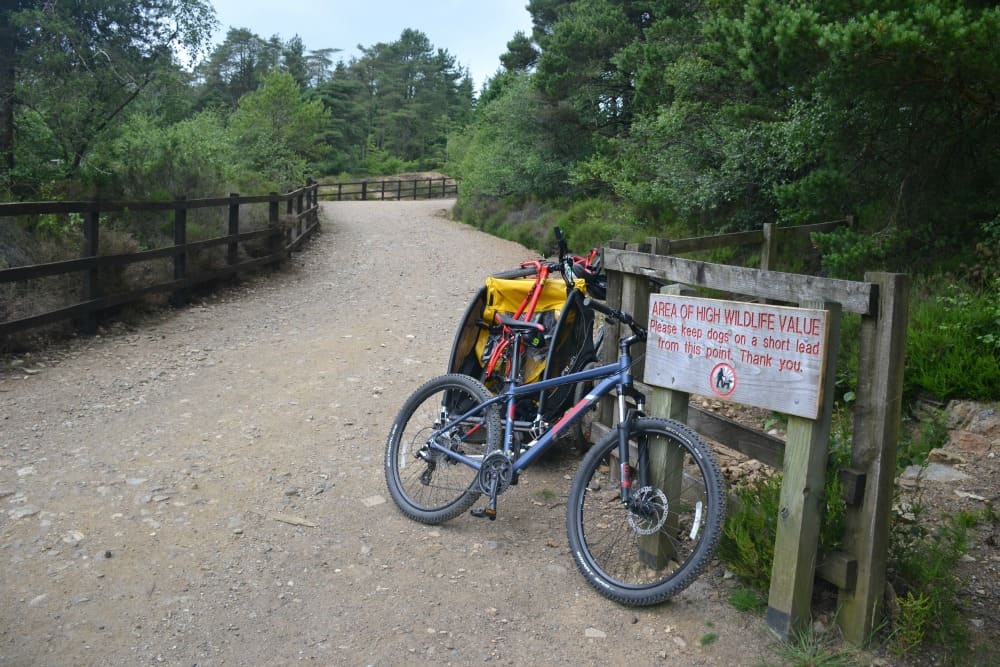 Mining heritage on the trail

Along the way we found lots of signage telling us about the heritage of the valley and the mining that took place here between the 1840s and 1930s. It was the largest copper and arsenic mine in the world and used cutting edge technology for its time. However, the working conditions were poor. Many of the miners suffered from the affects of the poisonous but prized mineral arsenic.

Once we’d completed the Wheal Maria loop, we returned to the Tamar Trails Centre along the Mineral Railway Trail, enjoying the less challenging final leg of our ride. In total we covered about 10km in just over two hours. This included a break for a picnic lunch at the ruined mine office at Wheal Josiah.

We might have continued south towards Morewellham Quay on the Canal Tunnel Link and Sheepridge Trails but by 1pm the girls were flagging. The final straw as Baby nodding off in the trailer – it was definitely time to call a halt to this adventure. We had a brilliant time at the Tamar Trails and will definitely be visiting again.

The trails are free to visit and open all year round. You can hire bikes for three hours or the whole day. See the website for full bike hire prices.

Handy information for visiting the Tamar Trails with kids

Have you visited the Tamar Trails Centre? Or are there any other Devon family cycle routes you can recommend to us?

Disclosure: we were given free bike hire at the Tamar Trails Centre. All opinions are my own and those of my family. 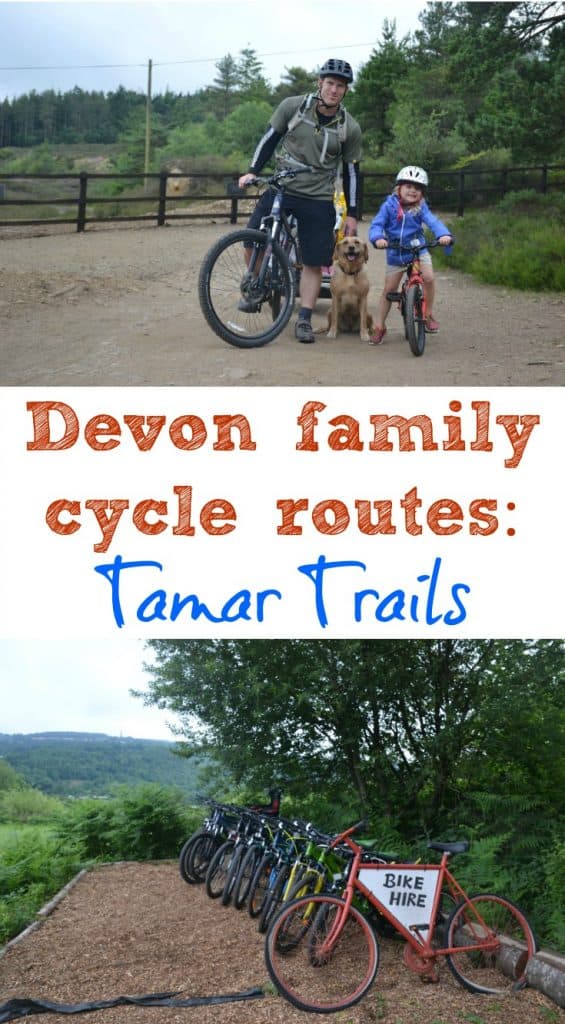 🐾Walk planning🐾 ⁣ ⁣ I have my heart set