I love flicking through holiday photos and my Travel Timehop gives me a weekly opportunity to share some of my favourite pictures from our adventures pre-Tin Box, as well as more recent family travels.

This memory seems all the more poignant following the terrorist attacks in Paris on 13 November. 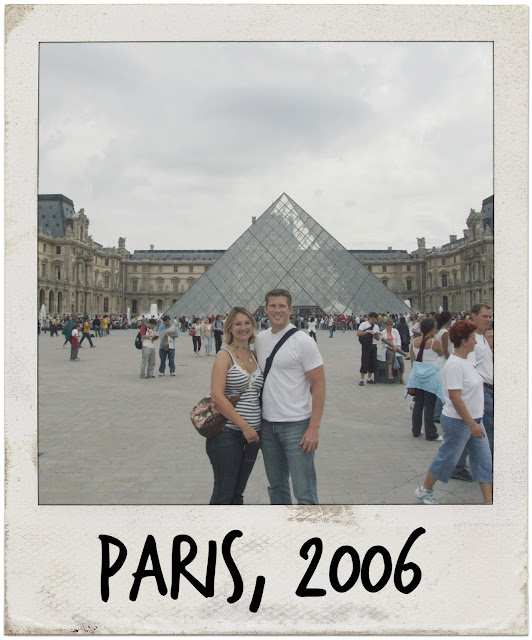 This Travel Timehop is from August 2006. Mr Tin Box and I were coming to the end of a month-long camping trip around Europe. We had pitched our tent in Belgium, Luxembourg, Germany and France along the way. There was also a visit to friends living in Spain, where we slept on the roof terrace of a Barcelona townhouse!

After Barcelona we travelled back up through France and decided to treat ourselves to a stay in a Parisian hotel. After a month without a bath and sleeping on an air bed it felt like Christmas. Our hotel was just off the Champs-Élysées, putting us within easy reach of all the sights.

We had three nights to make the most of the city and managed to fit in the Eiffel Tower, Notre Dame, Foucault’s pendulum at the Pantheon, and the Moulin Rogue. I’ve returned since for an exhibition with work at Paris Nord VillePointe but had nowhere near as much free time to look around the city.

We visited in the year Dan Brown’s Da Vinci Code was released as a film so, as you would expect, we couldn’t help but check out some of the landmarks in the novel. This Timehop photo was taken in front of The Louvre‘s iconic Pyramid. I won’t mention any Da Vinci Code spoilers here but it does feature.

I loved The Louvre and could have spent days looking around. But because we were short of time in the French capital we planned our visit to see a few of the most famous points of interest – the aforementioned Pyramid,  the Mona Lisa (I was surprised how tiny it was), and the Venus de Milo.

The terrorist attacks in Paris have made me all the more determined to return to The Louvre and soak up more of this wonderful city.