Watch out, learners about!

Ever seen a caravan with L plates? Neither had I until recently. 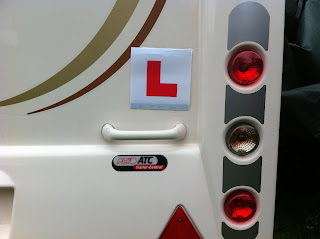 Our first month of caravan ownership brought a few surprises and some valuable lessons. Not least that there’s an important difference between ‘Maximum Authorised Mass’ and ‘Kerb Weight’.
When we put down a deposit on our wonderful new weekend retreat, we were confident our Land Rover Freelander would be more than up to the job of towing it. Mr Tin Box had also gained his category C licence for driving fixed axle lorries two years before, so was familiar with driving large vehicles.
Never-the-less, we had heard the towing rules had got stricter for anyone passing their driving test after 1997, so we checked www.Gov.uk for guidance. It was welcome news when it told us that, based on the ‘Kerb Weight’ of our car, either of us would be legally allowed to tow. At least, that’s how we interpreted the jargon at the time.
Feeling happy that we were ‘legal’, we cracked on with the rest of our ‘to do list’, including applying for membership of the Caravan Clubso that we could join our local centre.
While trawling the Club’s website for hints and tips for ‘new’ caravanners, we came across its outfit matching service for members.
Out of interest, we put in our particulars. A few moments passed while Mr Tin Box digested the feedback that popped up on screen.  I could tell all was not well. The Club’s simple calculator explained that the crucial ‘Maximum Authorised Mass’ of our outfit was in fact above the towing limit for a post-1997 category B licence holder, and this trumped Kerb Weight!
Quicker than you could say “damn the jargon”, Mr Tin Box was booked onto a B+E towing course and test. But not soon enough for him to be qualified to collect our van from the dealer as planned.
After a frantic bit of research, we worked out we could still pick up the van if we sat someone with a pre-1997 licence in the front passenger seat as an ‘instructor’ and stuck L plates on the back of the outfit.
So, a few days later, my father-in-law joined us for the road trip. It appeased the word of the law and enabled us to get the van home and loaded before our first weekend away, but it was clearly not a long-term solution.
Much to my father-in-law’s relief, Mr Tin Box passed his subsequent towing test with flying colours. The downside was it had cost us several hundred pounds more than expected to get on the road.
So, our first month with a tin box was a bit of an eye opener. Roll on 2013 and the opportunity to experience the less stressful side of caravanning!
Oh, and it’s worth mentioning that we have kept the L plates in the front locker, just in case we’re ever in a situation where Mr Tin Box can’t tow and has to supervise me behind the wheel.
Share