Our first weekend away in the tin box involved lots of familiarisation time. Working out which way to turn the valves to fill the on-board water tank; trying to get the heating running, then realising the thermostat switch was broken; and, erecting our bargain second-hand awning without instructions or a picture of the intended end result.

We expected a few teething problems and had stored up plenty of patience for the occasion. The fact Mr Tin Box enjoys a bit of DIY also helped. 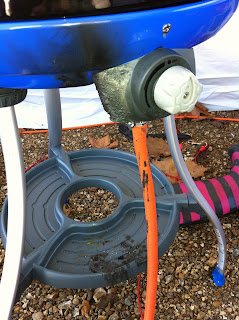 One thing we hadn’t anticipated was our brand new Cadac BBQ going up in smoke after being flashed up only twice.
Mr Tin Box had just served up a carnivorous feast of marinated chicken and beef burgers when there was a frantic banging on our front window. One of our neighbours had been walking by and, lucky for us, had noticed flames licking up the side of our BBQ.
Due to a fault, the plastic surrounding the temperature control knob had ignited despite the BBQ being turned off. The fire was quickly smothered, not with the extinguisher we had diligently bought for just such an emergency, but with a new set of tea towels and a spatula.
In the cold light of the next morning, the BBQ was a bit of a mess.
However, considering it had been connected to the caravan’s gas supply, things could have been a lot worse. Top tip: always isolate BBQs from their gas supply after use.
To Cadac’s credit they responded quickly by replacing the damaged parts within a matter of days.
Being hardy types, we weren’t put off by the experience, and enjoyed breakfast courtesy of our renovated BBQ on our second weekend away. I’m happy to report no linen or utensils were harmed during the making of this meal!
Share