‘Let’s go on a baby-moon’, I said, hinting at a relaxing city break before my husband and I were to become parents for the first time.

After a few moments of deep thought,  and one of those looks that told me my five-star dream was about to wither, he replied: ‘How about we get a caravan?’.
A month later, we were pulling away from a Dorset caravan dealer, the proud owners of our very own tin box.
That’s the way things usually happen in the Tin Box household. A seed is planted and within a very short space of time a triffid is born. However, this turn of events shouldn’t really have come as much of a surprise to me.
I am a second generation caravanner. My first trip away in a caravan was with my parents at the age of eight. After many years of holidaying in tents they had bought a Lunar Sunbeam. I remember it had bunks across the back for me and my brother, and a tiny, all-in-one bathroom that would have driven me barmy as a teenager. That’s me in the red trousers. 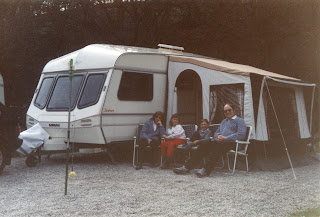 My parents have now been active members of their local Caravan Club centre for 24 years. Even after outgrowing regular family weekends away and – come to think of it – the tiny all-in-one bathroom, I continued to visit them in their ‘second home’ on a regular basis. The offer of a BBQ and promise of catching up with childhood friends, who were also taking advantage of free food in the great outdoors, usually did the trick.
By coincidence, my husband’s parents are also caravanners. However, they took up the hobby much later on – sparing him the frustration of sharing limited washing space with the ladies of his household during his formative years.
Having two sets of parents out and about on a regular basis maximised the number of opportunities for us to share in their adventures. So I suppose it was inevitable, really, that at some point we would join the UK’s growing caravan community ourselves.
However, after coming to terms with the fact I was going to miss out on my baby-moon, I had one non-negotiable condition: a large, rear bathroom!
Share