A delicious guide to food and drink on the River Dart

It’s not often you get to sample the delicacies of nearly 30 local food and drink companies in one day. But Mr Tin Box had just such an experience during his training for the 2016 London Marathon.

As a ‘warm up’ he (and Tin Box Dog) took part in the Delicious Dart Trail – a 15 mile cross country, fancy dress run between Totnes and Dartmouth on the River Dart. It was in aid of CHICKS – a charity working with disadvantaged children.

Along the way there were 14 pit stops where local pubs, food and drinks companies laid on tidbits for the participants to grab on the go.

Mr Tin Box completed the run – dressed as a scuba diver – in a healthy three hours and still managed to try tasters of locally produced beers, wine, pies and desserts. All of the food and drink he sampled is made along the River Dart – we hadn’t realised we lived in such a hot bed of culinary creativity.

So if you’re in search of great food and drink in Devon, check out these companies – you won’t be disappointed:

Organic, gluten free and vegetarian pie makers with a sideline in cakes, flapjacks and pastries. They handed out flapjack to the runners at the beginning of the trail – perfect energy food!

This artisan food company loves making back to basics fruit snacks. Also at the start line, runners could sample their Stripped Fruit snack, which is made using organic produce.

Only the best ingredients go into their bottled drinks, which can be found in posh nosh places around the UK. Luscombe’s Carrot and Organic Juice was available to quench pre-race thirsts.

Devon’s very own American-style flavoured coffee specialists. Coffee is not Mr Tin Box’s thing at all but having been left to look after the girls while he completed the run I would have loved a mug of this to keep me going.

Seafood specialists serving up fresh, local ingredients with the guidance of a seasoned London chef and West Country old boy. These guys were the first pit stop a mile in and greeted runners with a choice of savoury croissants.

Producers of world class wines and cheeses made with Red Farm assured Jersey cows milk. Sharpham were at stop two where Mr Tin Box happily tested all three wines on offer followed by a couple of excellent bites of cheese.

The UK’s first and only micro distillery creating grape-marc-spirit, Dappa. It’s an after dinner drink and obviously gave runners the kick they needed early on in the event.

Established in 1725, this country inn serves up home-cooked food using ingredients from local suppliers. The pub was the third stop and is at the bottom of a hill so had plenty of smiling runners arriving to tuck into freshly cooked samosas and bhajis.

This brewery can boast that it produces the largest range of bottled beers in Devon with nine to choose from. It was also at stop three at the Durant Arms, where generous servings of Neap Tide greeted the trail runners.

Tucked away on the banks of Bow Creek, this pub and restaurant offers alfresco dining with stunning riverside views. Mr Tin Box stopped at this four mile mark for more beer and thai fishcakes.

Recently revamped, this pub in Cornworthy specialises in pies and local ales. Five miles in now, runners were treated to a Hunters signature pie and another taste of Neap Tide from Teignworthy Brewery.

Organic food and drinks are the order of the day at this unique restaurant that offers only one sitting per day. These guys served up Rhubarb Pavlova at Fingals – the six mile marker. Mr Tin Box was a big fan.

Award-winning juices and cider made with some of Devon’s oldest heritage apple varieties in the West Country. Also at the six mile pit stop, Heron Valley was serving a cider for runners.

These award-winning Devon pie makers were awarded the title of ‘Britain’s best Cornish Pasties’ in 2009 – you can imagine how that went down across the border in Cornwall. They were offering some of their delicious pasties at the seven mile stop at the Red Lion in Dittisham.

Palmers have been brewing non-stop for 200 years. Their traditional ales are available throughout the South West and in their own pubs. They were serving up ginger beer at the Red Lion in Dittisham.

Known locally as the FBI, you are assured of a friendly welcome more than an interrogation at this riverside pub in Dittisham. They had a huge paella cooking outside the pub where Mr Tin Box stopped after eight miles.

This family-run brewery prides itself on consistent beers and good service. Mr Tin Box is already familiar with their ales but was still keen to remind himself of the flavour when offered a snifter at the FBI.

With an on-site dairy producing 22 flavours of ice cream made with local ingredients, this is a must find for anyone who loves their frozen desserts. Dartmouth Ice Cream Company had their mobile hut at Greenway House – the home of Agatha Christie – at mile nine of the course. We are regulars at their Dartmouth shop where they also serve dog-friendly ice cream.

These expert chilli growers add the hot stuff to just about any food and have had celebrity endorsement for their produce. At mile 10, the farm was ready with samples of their chilli chocolate to boost waining energy levels ahead of the home straight.

Specialising in Devon crab from sustainable sources, this company brings in a fresh catch of the finest crustaceans every day. Mr Tin Box said the crab pate served at this 11 mile pit stop at the Steam Packet was extremely tasty. He also recalls that their fancy dress was fantastic and that they had a dog the size of a horse! He may have been slightly delusional by this point!

This familiar West Country seafood restaurant chain began life in Dartmouth and now offers sustainable takeaway food opposite the Lower Ferry. At mile 14 and with the finish line in sight, fish and chips was up for grabs.

These guys offer freshly cooked food in a friendly environment and are always full for breakfast. Just down the road from Rock Fish, Cafe Alf Resco had hot drinks and flapjacks to boost the weary runners before their final push to the finish line.

This traditional delicatessen offers locally sourced, home-made foods. At last, waiting at the finish and mile 15 was a freshly baked cheese straw from Dart to Mouth Deli.

However, this wasn’t the ultimate finish line for Mr Tin Box. By the time the girls and I made our way in to Dartmouth to meet him he had found a comfy seat in The Dolphin pub and had started a pint of beer.

It’s safe to say the Delicious Dart Trail is not your average London Marathon training run, but it certainly was fun and introduced us to some great producers of local food and drink in Devon. Mr Tin Box will be running the Marathon in aid of the Royal Navy and Royal Marines Charity on 24 April, 2016. If you’d like to sponsor him here’s where you can find his Virgin Giving page.

Delicious Trails also organise foodie runs in Padstow in Cornwall and Dartmoor in Devon. Have you run one?

I’m incredibly excited to share that I am in the finals of the 2016 MAD (mum and dad) Blog Awards and the shortlist of the Brilliance in Blogging Awards. If you’ve enjoyed what you’ve read and have a spare minute please consider voting for me in the Family Travel Blog category of the MADs and the Travel category of the BiBs. 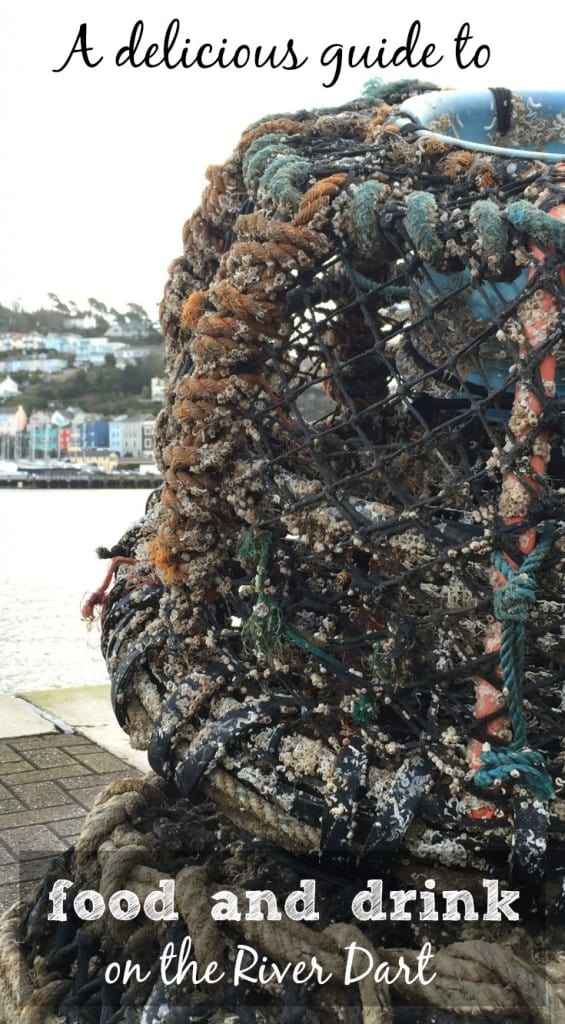