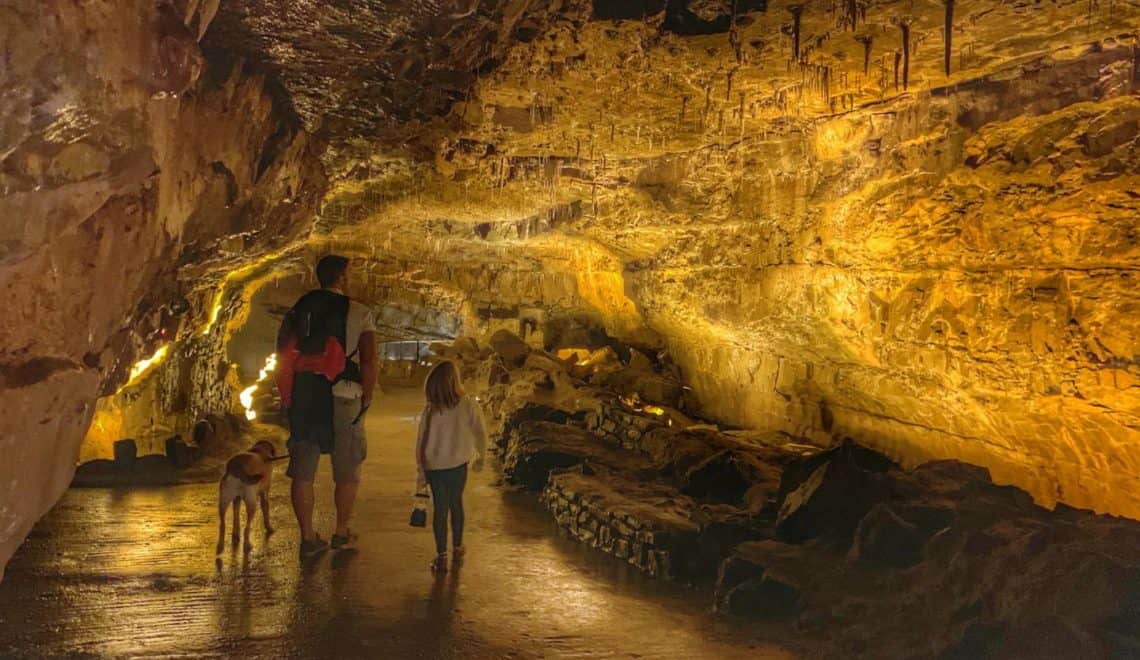 When you’ve had your fill of the beauty of the Brecon Beacons above ground, a top day out in Wales is the Dan-yr-Ogof caves, also known as the Welsh National Showcaves Centre.

We visited on an extremely hot summer day and were relieved to step into the caves. These are at a constant, cooling temperature 10°C. They would equally make a great wet day out in Wales as there’s plenty to see under cover.

What is there to see at the Dan-yr-Ogof caves?

The National Showcaves Centre for Wales has three caves to explore: Dan-yr-Ogof which was the first cave to be discovered in 1912; the dramatic Cathedral Cave with its 40ft waterfalls; and the Bone Cave where the remains of 42 humans, dating back to the Bronze Age, were discovered. 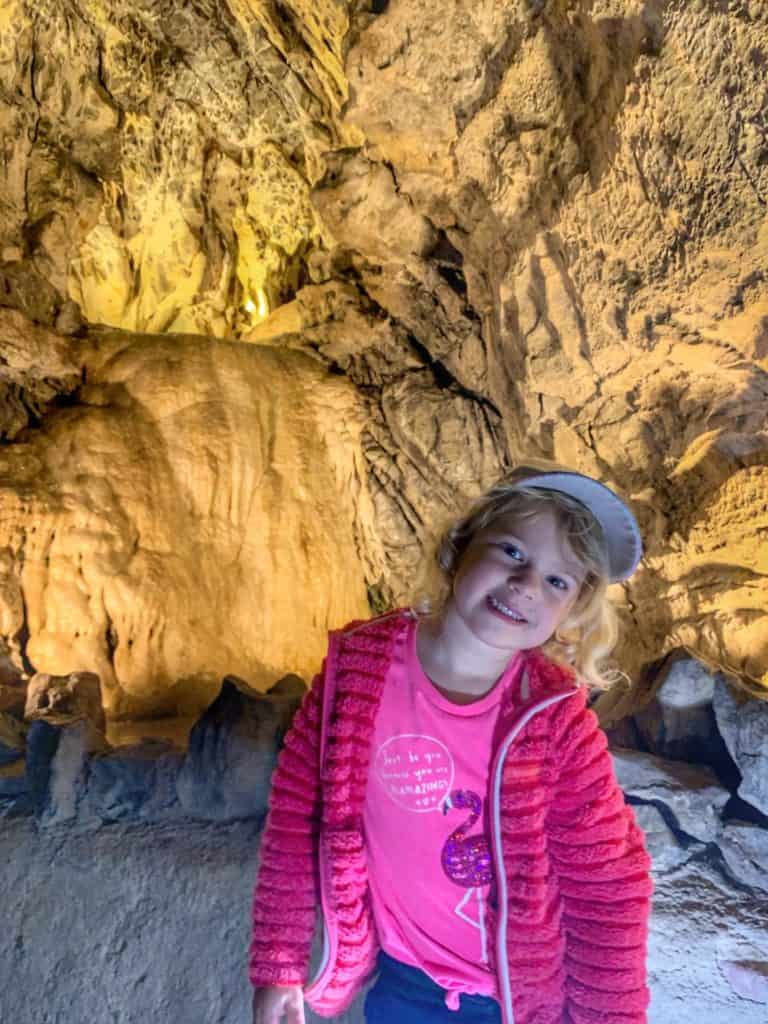 But it isn’t just caves. There’s also more than 200 life-sized dinosaurs lurking in the hillside forest, gold panning, archeological digs for kids, and a shire horse farm with adventure playground, ride on toys and giant board games. 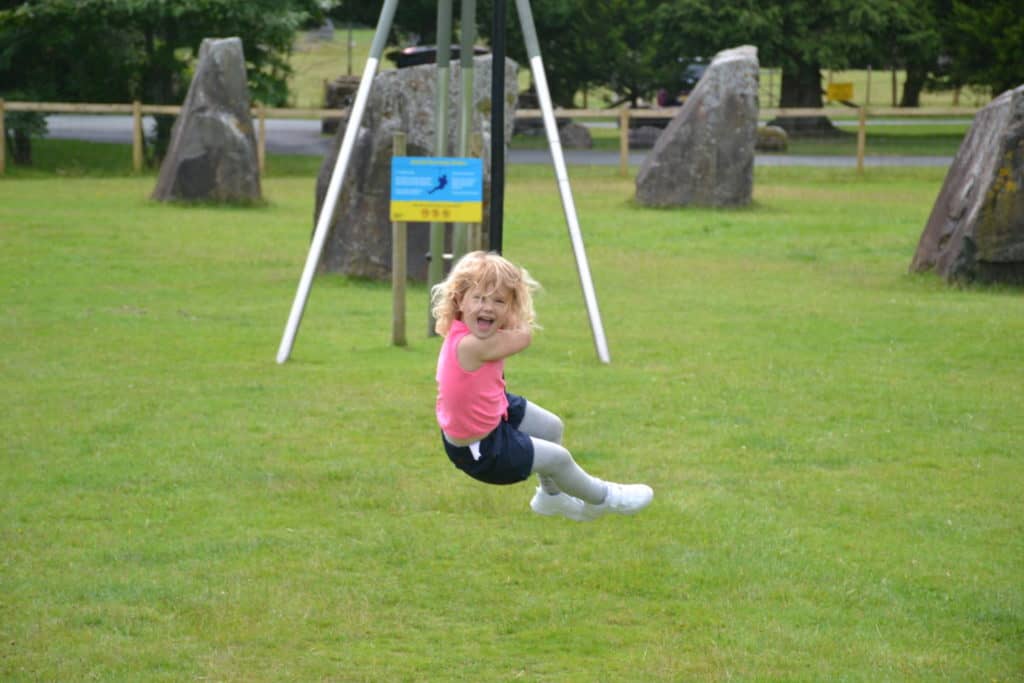 We spent three hours looking around – and our six and four-year-old girls did the caves at a fast pace! You could easily spend a lot longer with older children fascinated by geology, dinosaurs and history.

Find out what else we got up to during our summer holiday in Wales.

Here’s a bit more about everything there is to do and handy information about visiting the Dan-yr-Ogof caves with kids:

We – I mean Mr Tin Box and I – are fans of caves and we were impressed by the scale of the showcaves here in the Breacon Beacons. Each would have been impressive on its own, but to have access to three in one location was a real treat.

As you walk around each cave there are audio guides telling you the story of its discovery. And, in the case of the Bone Cave, its extensive history as a place where humans and animals took refuge over the centuries.

These audio guides are on loop. You need to hang around for the full story if you walk past at the wrong time. The girls didn’t give us the chance to do this!

Read about our visit to Kents Cavern in Devon.

Above ground the dinosaurs are a real kiddie-pleaser, especially if they start getting bored of the caves. They are also quite densely packed around the park landscape so there’s plenty to look at in every direction. 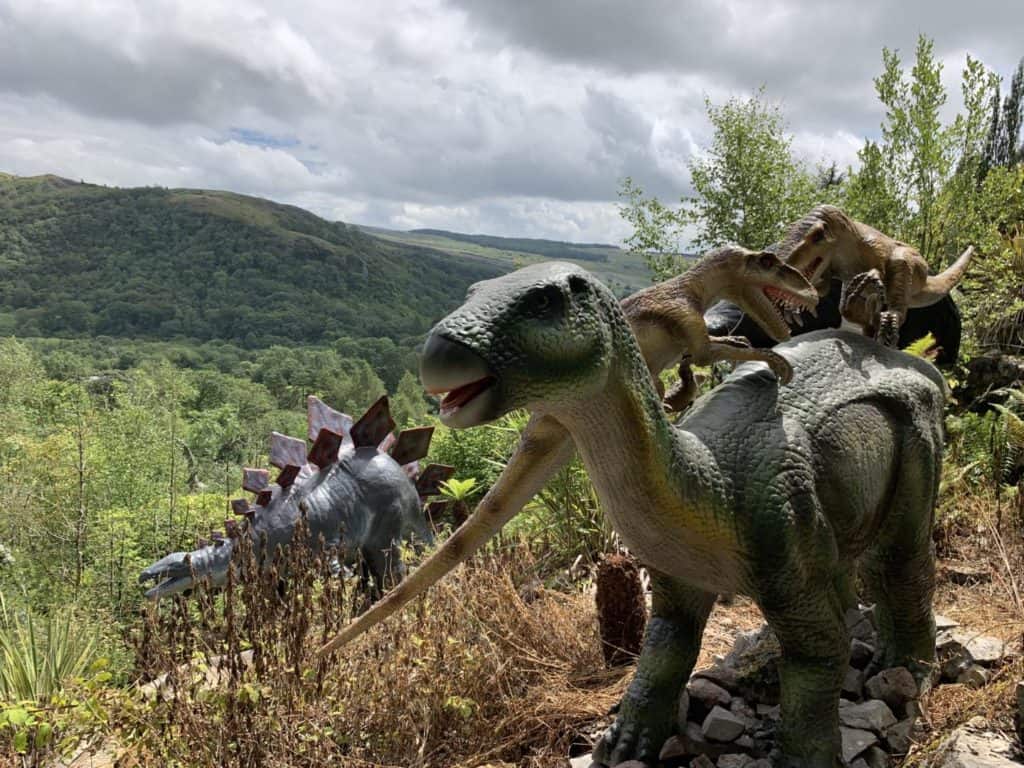 A lot of the Dinosaur Park is on the side of a valley, so younger children will need help to get around. Ours dragged their heels on the steeper parts.

In the centre of the attraction is a re-creation of an Iron Age Farm, which gives you an idea of the first type of settlement that would have been in the area.

Audio guides also tell you about the lives and the beliefs of Iron Age settlers who were very much linked to the land. 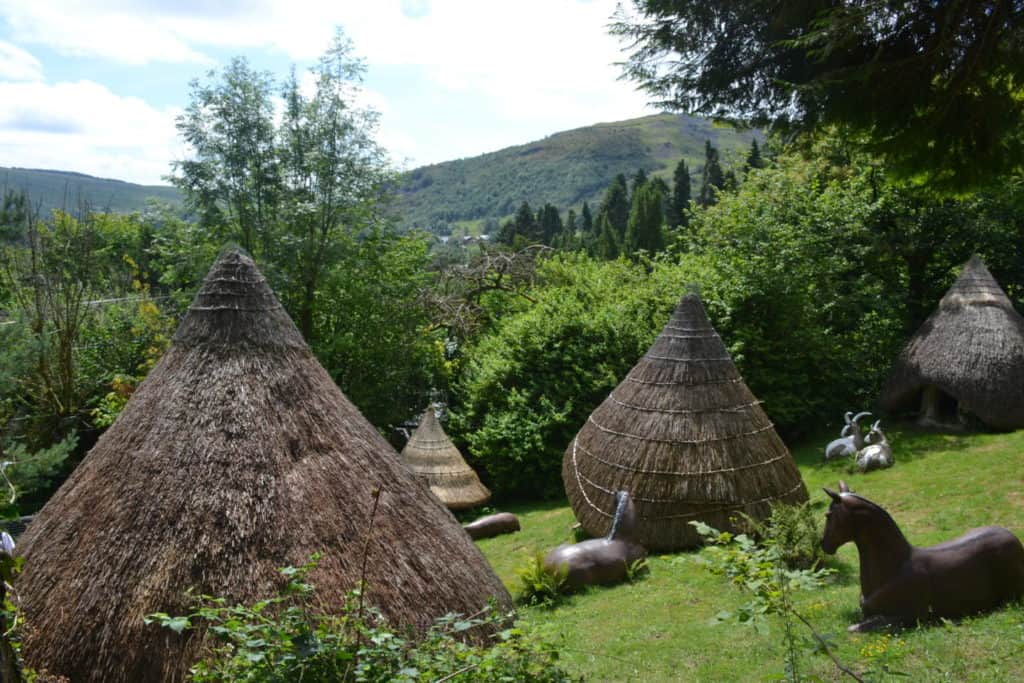 The farm is located in the valley and is home to beautiful shire horses, ponies, alpacas, goats, sheep, pigs and donkeys. If your kids love farm animals they could kill hours just here.

Baby was absolutely in love with the shire horses.

As well as the animals there are games, an indoor play area, outdoor adventure play area and farm scenes where a sheep dog talks you through life on the farm.

More things to do with kids

Don’t miss the climbing and play area on the left as you go in through the entrance gate. The girls enjoyed walking through the legs of a life-sized diplodocus and climbing tubes up a tree covered hill for quite a while.

You can pan for Welsh gold and see what you can find in an archeological dig near the main entrance. There’s also a small museum on your way out through the gift shop.

You can see some of our day out at the Welsh National Showcaves and more things to do in Wales with kids in the video we made about our caravan holiday in Wales.

How accessible are the caves?

You can reach the Dan-yr-Ogof cave easily from the main entrance without steps. However, the other caves are up slopes and steps. This makes it harder/impossible to access them if you are reliant on a pushchair.

The cave floors have been levelled but there are plenty of steps – 120 in the Dan-yr-Ogof cave alone. So it’s not possible to take pushchairs in. These need to be parked outside. Switch young kids to baby and child carriers.

The Bone Cave is the only one where a child carrier would not work as you need to stoop down on the walkway up to the cave and at the entrance.

Hard hats are provided but were too big for four-year-old Baby. She was too short to have a problem with the roof height anyway.

There’s a cafe serving hot and cold food, snacks, drinks and ice cream before the entrance to the cave complex and Dinosaur park.

This is also where the toilets and picnic tables are located. Make sure you take yourself and small children to the loo before you start exploring.

We found ourselves popping in add out of the entrance gate a few times, which was really easy. Just wave your entrance tickets at the team in the ticket booth and they let you through the gate.

Are the Dan-yr-Ogof caves dog-friendly?

Yes, you can take your dog around each of the caves and the Dinosaur Park, which made this such an attractive day out for us.

The only place Tin Box Dog couldn’t go was in the Shire Horse Farm, which is understandable.

You can park right outside the farm. Mr Tin Box and Tot stayed here with Dog while Baby and I went to meet the animals.

The caves are open from early April until early November and also on selected dates in February. You can visit from 10am. The last tickets are sold at 3.30pm during the Welsh school holidays and 3pm at all other times. Check the website for details.

At £55 for a family of four (in 2019), it was our ‘big day out’ of our Welsh holiday. But there was plenty to keep both the kids and adults entertained, and the story of the caves is told really well through audio guides and interactive displays in the museum.

Having the farm and dinosaurs to look around made it a great attraction to see with young kids too.

If you have fans of caves, dinosaurs and farm animals in your family then it’s a great day out in the Brecon Beacons.

Disclosure: we paid for our own visit to the Welsh National Showcaves. Our holiday in Wales was a campaign with Bailey of Bristol. All opinions are our own.

Planning a visit to Wales with kids? Why not save this post about visiting the Dan-yr-Ogof caves for future reference.