Back in the summer I had my first opportunity to spend a grown-up night away since Tin Box Tot was born. I was excited and nervous all in one. I was leaving my ‘baby’, but I would have my first uninterrupted sleep for more than a year. Sadly, sleep was the one part of my trip that didn’t go to plan.

So I had high hopes for a better kip when I visited the Bristol Marriott this weekend. 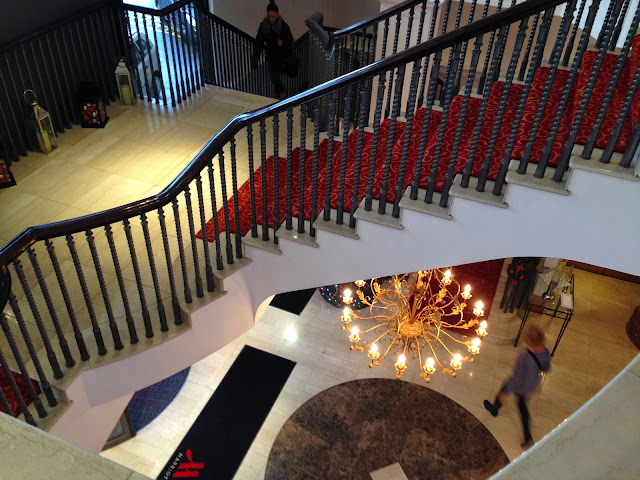 The occasion was again an awards bash with work, so my 24-hour stay in the city was very much focussed on the hotel. However, I’ve been to Bristol lots of times and am a big fan.

Mr Tin Box and I spent our first wedding anniversary there and, by sheer luck, hit the city during its Harbour Festival. This is an amazing free event sprawled across the city-centre and its waterside locations. We whiled away a few days drinking fruit-based pop onboard The Apple Cider Boat and discovering bands and performers dotted around the streets. We enjoyed ourselves so much we returned for our second anniversary.

Anyway, I was very excited about the prospect of a night off mummy duties, as well as a fantastic evening celebrating with colleagues and a lay in to the obscene hour of 7am.

The Marriott is on the north side of the city-centre next to Castle Park and within walking distance of bars, restaurants and other attractions. Retail fans will also be excited to hear that the hotel is right next door to the Cabot Circus shopping centre, which is home to big names like Harvey Nichols and House of Fraser.

By the time I arrived in Bristol there were just a few hours to kill before the evening’s festivities, so I decided to make the most of my ‘me’ time and went to chill out in my room.

I had a standard guest room on the third floor (prices start at £94 a night). It was immaculate and came with all the bolt-ons you would expect from a 4* hotel including air-conditioning, hair dryer, and iron and ironing board. I was a particular fan of the mini flapjacks propped on top of the tea mugs. Yum!

One of the first things I did was hop in the shower. It was only a minute or so in that I realised I didn’t have to rush – no little person was going to try to climb in with me or start throwing ducks when they got bored. I loved the mandarin scented hotel toiletries, which are made by Acca Kappa.

The hotel also has a gym and pool with sauna and spa. My colleagues have reliably informed me these were excellent.

After an extremely entertaining awards ceremony in the hotel ballroom – during which our clients won their second award of the year – I headed back upstairs. There was a light rumble of traffic from the street below despite it being past midnight, but I soon settled into my fluffy bed. Note to self – expensive mattress toppers are worth it!

I had a very comfortable sleep and woke to the sound of my 7am alarm – not ‘mummy, mummy, poo-ed’ – fantastic! Breakfast was a hot and cold buffet. I was ravenous (sleep is hard work), so I sampled the porridge, pastries and full English. It was a tasty and filling start to the day.

Before checking out I had the chance to take a few more snaps around the Marriott, which is decked out for the Christmas season. I love the simple decorations and am going to be pinching a few ideas for my own home.

Throughout my short stay, the Marriott staff were polite and helpful. They are also active on Twitter and noticed I mentioned them a few times. Thanks for the extra flapjack Team Marriott!

How did you spend your first couple of nights away from your child/ren? Did you leave it as long as me?

I was staying at the Marriott with work, so did not pay for my accommodation myself. I did receive a lovely card and some extra biscuits from the hotel staff during my stay but all views expressed in this post are my own. I may be pregnant, but I can’t be swayed that easily 🙂