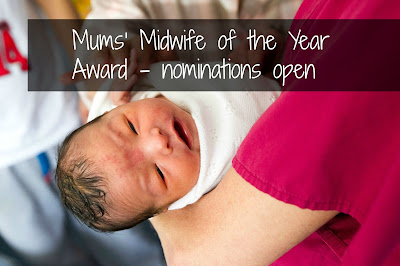 When I found out I was pregnant with my first daughter I was pretty clueless a part from knowing that in nine months time I would be looking after a baby. What happened in between was a bit of a mystery to me.

If it hadn’t been for my cool, calm and matter of fact community midwife I’m sure I would have been lost in an avolanche of tests, medical terminology and scans.

She was good. So good in fact that she was award-winning. Mandy Grosvenor was named Mentor of the Year at the 2013 Midwife of the Year Awards for her support of her student midwife.
I am not ashamed to admit that I wept a little when we moved house after Tin Box Tot arrived as I knew I’d no longer fall into Mandy’s patch. When you’ve been lucky enough to experience the care of someone who goes above and beyond as part of their daily routine it’s hard to imagine how you are going to do it again without them.
I’m sure a lot of pregnant women and new mums have bonded with their midwives in a similar way. If this sounds like you then I want to tell you a bit about the Midwife of the Year Awards. This annual ceremony is run by The Royal College of Midwives to recognise the special role midwives have in caring for women, their newborn and their families.
In 2016 Emma’s Diary is sponsoring the Mums’ Midwife of the Year Award which enables mums to say ‘thank you’ to their midwife for going above and beyond the call of duty to provide reassurance and support before, during and after their birth.
Nominations are open now. 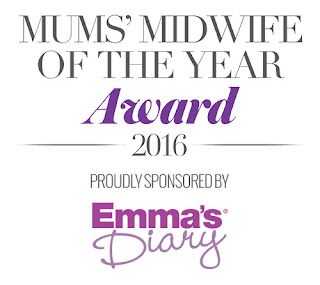 As an Emma’s Diary blogger was given the opportunity to ask Jacque Gerrard, England Director of the Royal College of Midwives, a few questions about midwifery, the awards and what makes a winning midwife.
Hi Jacqueline, can you tell us what it means to be a midwife?

I see being a midwife as a very special and privileged role. Midwife means ‘with woman’. It’s a title protected by law and I cannot think of any better role in life than to support women bringing new life into the world and putting new families on strong foundations – the best start in life for babies!

We focus on the whole of the woman’s journey: the antenatal period where we advise women on screening, choice of birthplace – whether home, birth centre or hospital. We support her in developing her birth plan and discuss options for feeding. Then of course there is the support in labour when we work extremely hard to ensure continuity of care which can be a challenge. In the postnatal period we encourage women to transfer home as soon as possible so that the community midwifery team can continue to support women in their own home environment.

Midwives are also very involved in initiatives to help women to stop smoking, adopt healthier eating, understand exercise in pregnancy adn the importance of Flu Vacination in pregnancy. All this helps to build healthier families and children for the future!

Why do men and women become midwives?
Women or men become midwives because they want to support and empower women to have a positive birth experience. Women tell us that they remember every detail of their birth until their dying day and it is extremely important that the birth process is positive as it has an impact on how the relationship bonds between mother and baby.
To have a role where you can support and be with women to achieve this is particularly rewarding for midwives as they feel they have made a difference to that woman and her family’s whole life. How may jobs in life are like that? To be a midwife you need to be caring, compassionate, committed, a good communicator, courageous and kind if you are to succesfully advocate on behalf of women. It’s the best job in the world!
Can you tell us about the Mums’ Midwife of the Year Award?
I’m feeling particularly excited and so looking forward to being at the Annual Midwifery Awards. But the highlight for me is always the Mums’ Midwife of the Year with all the mums and infants and midwives together celebrating and getting recognition for the great work they do.
We’ll be presenting trophies to seven regional winners and the overall UK winner at out exciting event on 8 March 2016 at London’s The Brewery venue. Over 400 midwives, their supporters and senior figures from health policy and government will be there. The atmosphere will be great and Kate Silverton the broadcaster will be our compere.
Why should mums nominate their midwife?
We want to know about how your midwife helped strengthen the bond between mother and baby. How they helped you feel in control and involved and empowered. How they helped you cope with the situation and how they supported you emotionally.
Tell us about about previous winners
They are been from all parts of the UK and have been nominated recognising some of the key qualities that make a great midwife.
For example Jackie McClean in Northern Ireland supported Louise Bailey who had trouble getting her baby to latch on to breastfeed. She told us: “She made the first few very daunting days as a new mum much easier for me by putting me at ease. She gave me the confidence to say ‘I can do this’.”
Julie Rogers in Wales was classed by Carla Kenyon as “a human angel…who treated me normally and with empathy and told me I would get better.”
Joanne in Merseyside was hands on explaining every process and test. “She took time to comfort and put me at ease,” said Lindsey who had a serious and frightening condition. “When I thought I couldn’t do it anymore she spurred me on.”
They are all normal midwives doing what midwives do but going the extra mile and building relationships with mums which can transform their lives.

Nominations for the Mums’ Midwife of the Year

If you gave birth in the UK between 01 November 2014 and 31 October 2015 inclusive or if your baby is due on or before 31 October 2015, and had midwifery support either before, during or afterwards that you feel deserves special recognition, please complete the nomination form and your midwife could win this very special award.
The closing date for nominations is midnight on 31 October 2015.
Seven regional winners and the mums who nominated them will be invited to accept their award at The Royal College of Midwives’ Annual Midwifery Awards to be held in London on 8 March 2016, where the national Mums’ Midwife of the Year Award, selected from the regional winners, will also be announced.
Note: I am sharing this post as an Emmas Diary blogger.