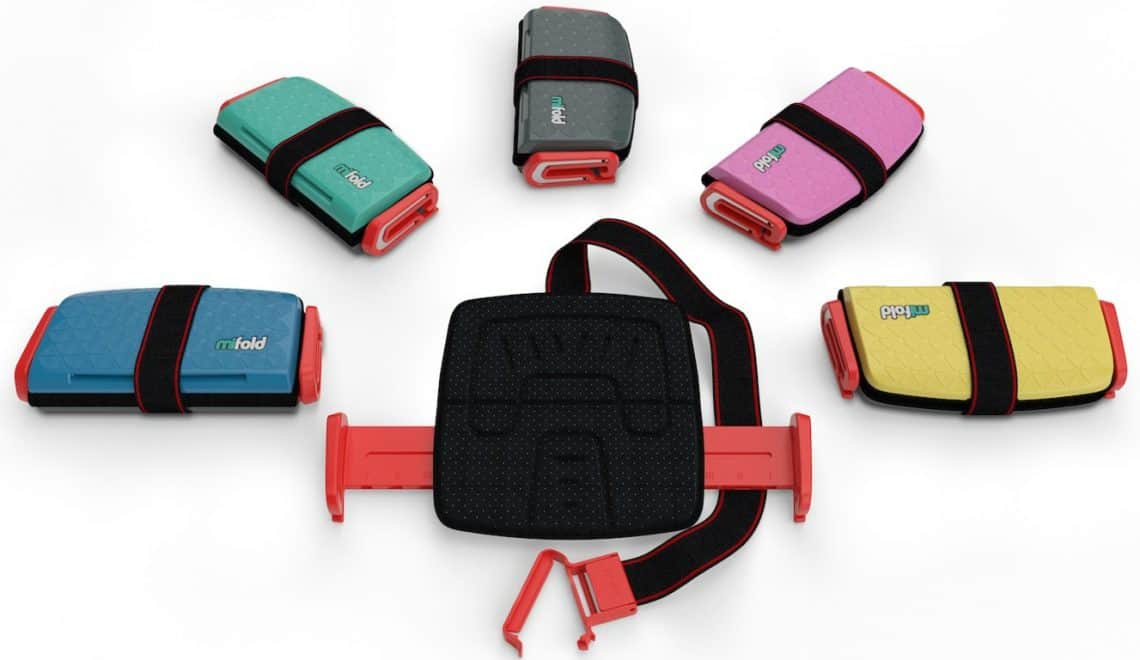 I’m ashamed to say I’m one of 33% of parents in Europe to put their child in a car without a suitable booster seat – and it terrified me. The reason I’m sharing this story is that there’s now no excuse thanks to the mifold – the Grab-and-Go Booster® seat. We’ve been sent one so I can tell you about its benefits.

This happened during our trip between Barcelona airport and our city-centre hotel last year. It was a 40 minute taxi ride that I hadn’t given a second thought to before our trip. But as our driver sped down the motorway, weaving between the late night traffic I clung onto my girls to the point where they knew mummy was not happy.

Three-year-old Tin Box Tot was wearing an adult seat belt next to me while I bear-hugged one-year-old Tin Box Baby on my lap. I hate to think what might have happened if our ‘professional driver’ had faltered.

Luckily we arrived at our hotel unscathed but I was shaken by the experience and knowing that we would have to do it all again on the return journey.

We could have avoided this stress if we had we brought our own car seats. What put me off doing this was lugging the bulky items all the way to Spain for a short car journey. Had I known how I stressful it would be I’d have thought differently about the inconvenience.

If we were to do the same trip today there’s a light-weight and portable car seat that would protect four-year-old Tin Box Tot.

I first came across the mifold at a blogger event in London 18 months ago. Jon – the inventor – told us how he’d come up with the idea after finding himself in similar situations as me.

“The mifold – the Grab-and-Go Booster® seat is the most advanced, compact and portable child car safety seat ever invented. It’s more than 10x smaller than a regular booster seat and just as safe.”

It’s even been endorsed by NASA – the design is that clever!

How to use mifold

The mifold has not been created to replace the existing booster seats – it’s there for times a regular booster seat is not available.

Instead of lifting the child up, mifold does the opposite and holds the seatbelt down to ﬁt the child. Here’s a handy video to show you how:

How safe is mifold?

If you’re on the ball you’ll know that the UK’s booster seat laws were updated on 1 March 2017. The law says that all children must use the correct child seat until they are 12-years-old or 135 cm in height (which ever comes first).  mifold is a Group 2/3 seat and can be used by children from the weight of 15kg which is approximately the age of four-years-old.

Existing booster seats and cushions such as mifold are NOT aﬀected by the new rules. Here’s the government’s rules for seats already on the market.

So is mifold really safe, or has it just slipped under the radar? Here’s what Jon has to say: “mifold have been crash tested multiple times in testing facilities around the world and have successfully complied with the performance requirements of all these regulations.”

After hearing so much about the mifold and its development I would not hesitate to use one for Tin Box Tot. I’d much rather do this than put her in another risky situation when we travel.

Where to buy mifold

mifold is now available in the UK from John Lewis and other selected retailers*.

*Disclosure: this post contains Amazon affiliate links which means I may earn some advertising fees if you click on an affiliate link and make a purchase. You will not be charged extra for this. We were sent a mifold – the Grab-and-Go Booster® seat in exchange for a mention on the blog. However, I am genuinely happy to endorse this product.