Two weeks after getting home from our summer travels it seems about time that I put my two index fingers to work and bring this blog up to date.

A month before we hitched up for our big family holiday our plans were pretty loose.  We had booked a week in Devon in the middle of August and were invited to a wedding in Scotland at the end of the month.  After checking out the cost of flights to Glasgow we decided we might as well turn our two trips into a bit of a Tin Box tour. Yes, that’s right, Hampshire to Scotland, via Devon, and back in 17 days.

Our first stop was Dawlish Warren where we joined the West Hampshire Caravan Club Centre one week into its holiday rally at Warren Farm. Organised activities included quizzes, a cream tea, a boat trip along the Jurassic Coast, and an expedition to the beach for a sandcastle competition. We also braved the local tourist saturated roads for a bit of sightseeing.

Dartmouth is a firm favourite for a visit because of our Naval connections. We have called in on this picture perfect harbour town many times and this time decided to take a circular walk up and down the River Dart. The incentive of an ice cream at the end spurred us on.

We navigated the Dart Valley Trail from Kingswear to Dittisham with a bit of help the map on Mr Tin Box’s iPhone. This is hilly trek has its rewards: dog friendly paths away from roads, glimpses of the Dartmouth Steam Railway, stunning views of the river, and the opportunity to visit Greenway – Agantha Christie’s holiday home.

We took the ferry from Greenway across to Dittisham for a well-earned lunch in the Ferry Boat Inn (known locally as the FBI). I can recommend the ham, egg and chips as a hearty stomach filler for weary walkers.
As the day was wearing on and baby Tin Box was looking a little fed up, we decided to take the ferry back to Dartmouth where we enjoyed the promised ice cream while watching families crabbing in the harbour. 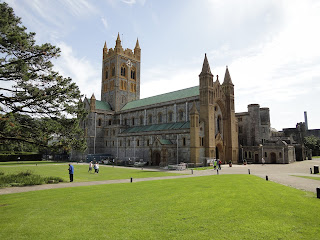 Another of our day trips was to Buckfast Abbey – a historic monastery that was demolished by Henry VIII and restored by Benedictine monks between the 1880s and 1930s. Its gardens have been reconstructed to their medieval splendour, complete with a bed of poisonous plants. This summer, the Abbey gardens also hosted an exhibition of outdoor sculpture. Not much of an art lover, Mr Tin Box’s interest mainly centred on the Abbey’s brewing heritage.

The finale to our week in Devon was the Dawlish Warren fireworks, which we enjoyed from the comfort of Tin Box with a glass of wine.

It was a very chilled out seven days, with too much food, just the right amount of sun and the satisfaction of knowing that we still had another week and a half of our holidays ahead of us.

Check out part two of our summer tour blog, including a stop off in Staffordshire and four nights in the Lake District.