Each week in 2015 I’m flicking through the pages of our holiday photo albums to find some cracking memories to share with you. In 2008, Mr Tin Box and I embarked on the adventure of a lifetime – marriage.

I’m happy to say that there have been masses more highs than lows and…excuse the tenuous link…this week’s Travel Timehop memory comes from a literal high on our honeymoon. 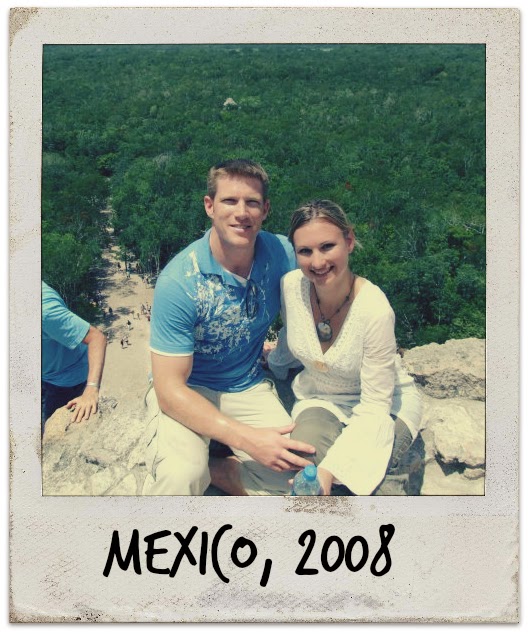 Sorry, I’ve already given the game away – it’s 2008 in the two weeks straight after our wedding.

After an amazing few days in Las Vegas we flew to Mexico for the second stage of our honeymoon. We had booked an all-inclusive, adults only hotel just south of Cancun – perfect for a relaxing week eating, drinking and sitting by the pool.

However, we’re not very good a sitting still, so we broke up our restful week with a couple of excursions. Mr TB chose to book us onto a speed boat trip and snorkelling, while I opted for something a little more educational, a trip to the Mayan ruins at Coba.

This week’s picture was taken at the top of the Nohoch Mul pyramid at Coba, which is the highest temple on the Yucatan Peninsular. We had just climbed 120 steps in the baking sun to get to the top, so that’s why we look a little sweaty. It was well worth it though as the views were amazing.

The Coba settlement, which was abandoned in the 1550s when the Spanish took over, is surrounded by jungle. Many other smaller ruins are nestled between the trees.

Close to Nochoch Mul there’s an intriguingly designed ball court with stone hoops at the top of two adjacent slopes. The rules of the game have apparently been lost over the centuries, but our guide enjoyed sharing the theory that human heads were used rather than balls! 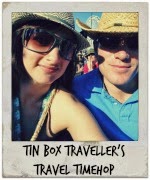