December 10, 2015 7 Comments
Welcome to another Travel Timehop where I share memories from our adventures during the past decade. This week’s comes from a fun day out we spent searching for ‘wildlife’ close to home. 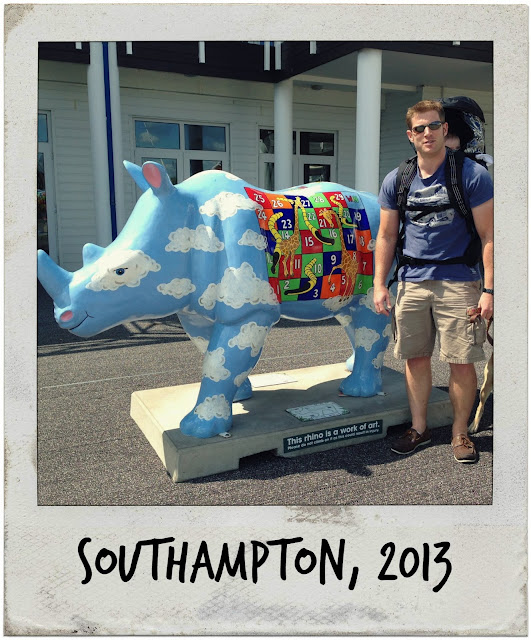 It was September 2015 and we had just come home from a three-week holiday that took us to Devon, the Lake District and Scotland. As the weather was lovely we decided to keep the summer vibe going with a day trip.

I had heard there was a public art event going on not far down the road from us in Southampton, so we decided to take a look.

Go Rhinos! was a collection of 37 temporary art installations curated by Marwell Wildlife. Each of the sculptures was designed by a different local artist and could be found on a trail around the city. 250,000 people visited the trail over three months. At the end of the event the sculptures were auctioned off making £127,000 for charity.

This picture was taken at the Red Funnel ferry terminal in Southampton and features the first rhino we saw on the day. I immediately fell in love with it and wanted to see as many as we could. We downloaded the Go Rhinos! app, which came with a map and information about each decorated beast, and began ticking them off as we went.

We had great fun and must have covered a few miles around the city. I think if Tin Box Tot had been a bit older than six months she would have enjoyed searching for the Rhinos too. As it was she slept round most of the trail in her baby carrier.

Maxwell Wildlife is staging a similar event in Southampton during the summer of 2016. This time the city will play host to a stampede of Zany Zebra. If we are in the area at the time we’ll be joining the search.

If you want to find out more about things to do in the city check out my 10 reasons to visit Southampton.