Welcome to another week in my Travel Timehop series where I share a snap from my holiday albums and the story behind it.

This week’s picture comes from a trip that was more about an event than the destination hence the fascinator – not my usual travelling clobber! 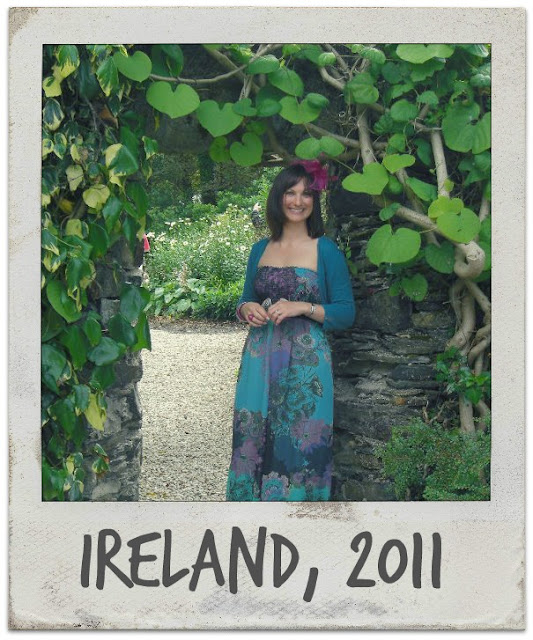 It was July 2011 and I was on a girly road trip to a friend’s wedding.

The wedding was held in County Donegal, Ireland, where both the bride and groom have family connections. They have since moved to this rugged part of the world and post lots of Facebook pictures of stunning beach walks and amazing sunsets. I’m not at all jealous!

County Donegal is to the north west of Ireland – not the easiest of places to get to from Hampshire in the UK, so it called for a bit of a road trip. Mr Tin Box was otherwise engaged with the Royal Navy but luckily I had a few friends to travel with.

The first leg was a flight from Southampton to Dublin. From there we hired a car and drove 150 miles to Letterkenny in Donegal. While the Irish drive on the left there were still a few subtle differences in road etiquette and signage that meant we had to keep our wits about us.

All the wedding guests were put up at a lakeside watersports centre. The accommodation was youth hostel-style and mainly used by school parties, but it had everything we needed for our three night stay.

The wedding was fantastic and so happy – a real reflection of the lovely couple who were the focus of the celebrations.

A day later we returned to Dublin and had a few hours to look around before our evening flight back to Southampton. We browsed around the shops on Grafton Street and visited the Guinness Factory – two things you have to do in Dublin. I only wish we had had time to do more.

This picture was taken at The Glebe House and Gallery in Donegal, Ireland. The gallery is home to more than 300 works by 21st Century artists including Picasso.

We were able to browse around the gallery and house grounds while the bride and groom’s official photos were taken. It was a beautiful setting for a lovely day. Plus we were treated to the yummiest cupcakes while we waited. Catering really makes a wedding!

Where’s the furthest you have travelled to attend a wedding?
I love hearing what people think about my blog so feel free to leave a comment below or browse around. You can also find me on Bloglovin’, Twitter, Facebook, Instagram, Pinterest, Google+ and LinkedIn.