Welcome to my Travel Timehop series where I dust off our photo albums and pick a picture from our travels to share with you. They all come from the past decade – some before we started our family and some after. All represent happy memories made in the UK, Europe and further afield.

I was reminded about this week’s timehop snap after we took a train ride to London during the school half term. 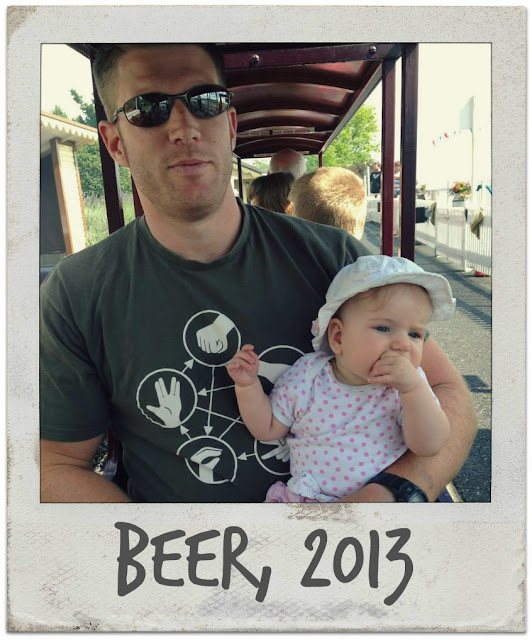 It was August 2013 and we were on our first summer holiday as a family of three.

We had parked Tin Box at the popular Devon beach town of Dawlish for a week. From there we went to the beach, enjoyed some great walks and visited a few attractions. However, with Tin Box Tot just six-months-old those attractions were more for the benefit of the adults than her. That’s how we needed up an hour down the road at Pecorama in Beer.

Pecorama is home to the makers of the model railway track PECO Streamline and PECO Setback. For train enthusiasts like Tin Box Grandad it’s a dream.

Alongside the model railway exhibition there’s gardens with an adventure playground, indoor soft play, an Orion Pullman Carriage where you can have a yummy cream tea, and the Beer Height Light Railway.

This picture was taken while we were chuffing around the Pecorama gardens on one of the scaled down steam locomotives. It was Tin Box Tot’s first ride on a train – an important right of passage in any six-month-old’s life. She’s been on a few more since including a steam train at Moors Valley Country Park and Grandpa Pig’s train at Peppa Pig World.

However, her first ride on a modern train didn’t happen until last weekend. TBT thought it was great fun and was amazed by how fast we travelled. We were on a stopping train from Woking to Clapham Junction but it must have felt like something out of science fiction compared to the joy rides she was more used to. Trains are now definitely one of TBT’s favourite forms of transport and may even top tractors!