Welcome to my weekly Travel Timehop where I share moments from our travels during the past decade. Some posts have included our new family and others have come from before we were parents. This week I’m sharing an unmistakable landmark that we visited just after getting married. 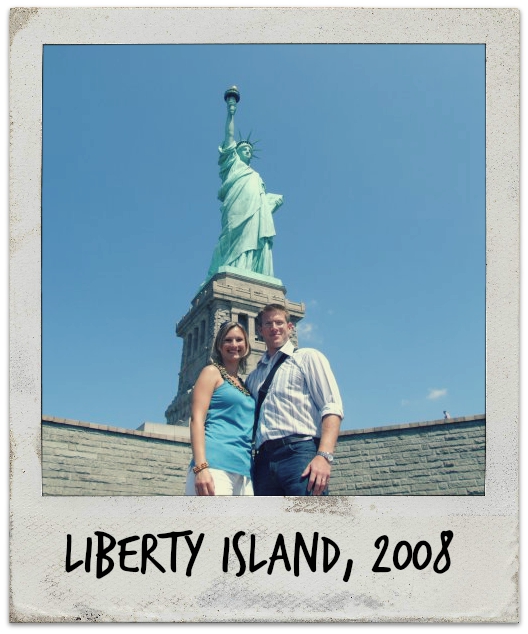 It was the summer of 2008 and we were on the final stage of our honeymoon.

Er, no prizes for this one. We were on Liberty Island in New York.

We had just three nights in New York, so no time at all to see everything that this city (in fact, any city) has to offer. Mr Tin Box had visited a few years before while serving onboard a Royal Navy aircraft carrier so acted as tour guide during our short stay. Our aim was to see the Statue of Liberty, Wall Street, the Empire State Building and take a city bus tour in a day as we also had family to see in the area another day.

On our first morning we were up early to avoid the crowds, with Liberty Island as our first stop. We boarded the ferry from Battery Park in Lower Manhattan and arrived at the Statue of Liberty by mid-morning, just when things were starting to get busy.

Mr TB regaled me with stories of how he’d last been there in uniform and was able to climb part of the way up the statue. A lot had changed in couple of years and we were unable to climb the statue at all. You can now reserve tickets to climb all the way to the top.

We lingered long enough to have a photo taken in front of the statue and then took the ferry to Ellis Island where we visited the Immigration Museum. The museum is the old immigration centre where 12 million people passed through between 1892 and 1954.

It is a grand building but also has the feel of a Victorian railway station. I expect it was still a welcome sight to the people who had been traveling for weeks or months to get there.

The mind-boggling number the people who arrived in the United States and saw the Statue of Liberty as their first American landmark is humbling, especially today. Each family, each person had their own story and wanted to make a future for themselves.

Have you visited Liberty Island and Ellis Island?