I’ve always loved visiting stately homes and castles. As a kid I would daydream about what it would be like to live in one hundreds of years ago. From this I developed an interest in history and particularly the Tudor era – who isn’t interested in that medieval soup opera?!

This week’s Travel Timehop comes from a visit to a beautiful castle in the UK which has seen it’s fair share of historic drama. 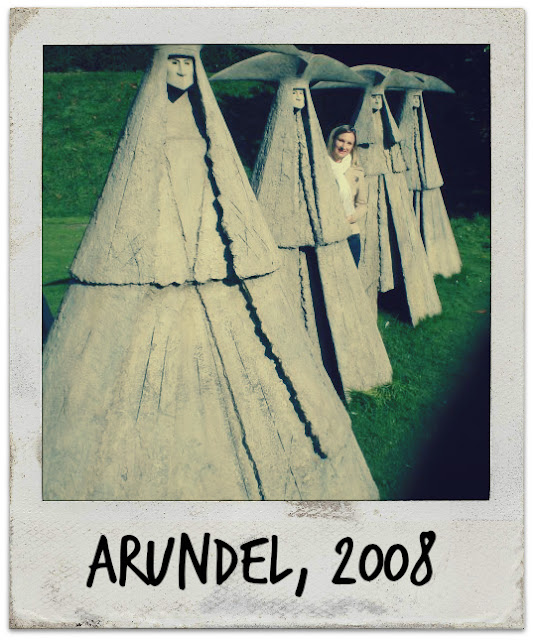 It was the autumn of 2008 and a few months after Mr Tin Box and I tied the knot. Despite having three weeks off for our wedding and honeymoon we some how managed to blag another week in October. Who knows where my holiday allowance came from back then?

We were on a day trip to Arundel Castle in West Sussex. It was built in the 11th Century and has been the seat of the Dukes of Norfolk for 850 years.

In the 15th Century it was the home of the Howard family who did their fair share of dabbling in state affairs in Tudor times. I had caught part of The Other Boleyn Girl on the flight home from our honeymoon so was on the look out for any mentions of Henry VIII and his many wives in the castle’s collections.

The interior of the castle has everything you would expect, from an armoury to state bedrooms and an amazing library. There’s tapestries, finely crafted period furniture and artworks by masters such as Van Dyck and Gainsborough. There were plenty of Tudor portraits to keep me happy.

If your legs don’t go too wobbly with heights, a climb up into the Norman keep is also well worth it for the stunning views across the countryside and out towards the sea. I am not good with heights and found the steep steps on the outside of the keep a little challenging, especially as it seemed to be the busiest part of the castle during our visit.

Another part of the castle I can highly recommend looking around are the gardens. This week’s Travel Timehop snap is me peeping out from behind some rather ominous looking chaps that were installed in the castle grounds. I can’t recall if they were a permanent feature or just visiting art. Anyway, it made for a fun picture.
However, a permanent feature that you must see if you go to Arundel Castle is the Earl’s Garden. This walled garden is full of wooden sculptures, water features and pagodas. The star of the show is Oberon’s Palace – a glimmering water cave with a crown ‘floating’ on a fountain of water at its centre. It is just beautiful.
Have you been to Arundel Castle? Are my friends still there?