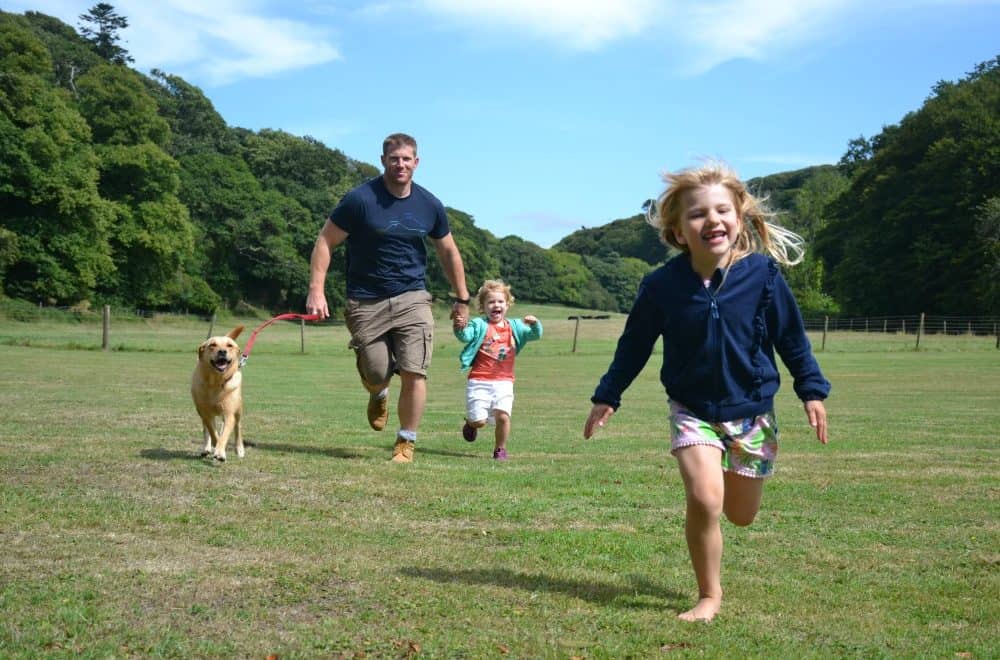 Hartland Abbey: a family day out in North Devon

In all our visits to see family in Hartland we’d never made it to Hartland Abbey. This private North Devon country home, which was built as a monastery in 1157 and fell foul of King Henry VIII’s campaign against the Catholic Church, has more than a few stories to tell. We also have a personal connection to Hartland Abbey as Mr Tin Box’s Grandma used to work here as a cleaner. It’s a wonder that it’s taken us so long to visit but we managed it during our 2018 summer holiday in North Devon.

An abbey and family home

Hartland Abbey is owned by the Stucley family. They are descended from William Abbott – the Sergeant of King Henry VIII’s wine cellar at Hampton Court – who was given the estate when the monastery was dissolved. He must have done a good job as Hartland is a fine house in a beautiful North Devon location.

When you step inside Hartland Abbey it’s immediately clear that it is still a home. Everywhere you look there are family heirlooms that have been part of the building’s fabric for centuries. Sometimes when houses like this are left in trust these personal memorabilia get lost along the way making them feel more like a bare film set.

The house was renovated in the 18th and 19th Century. The dining room and drawing room walls are decorated with scenes from the Stucley family history. These include many famous historic characters and moments such as the coronation of Anne Boleyn during which a Stucley ancestor played a ceremonial role. Amazingly these dramatic murals were covered by a ancestor who didn’t like them much. They were rediscovered decades later. The benefit for visitors today is that the vibrant colours have been perfectly preserved.

Photos are understandably not allowed within this private house so I was not able to use my camera. But believe me that the artwork, wood panelled rooms and fascinating ornaments are worth seeing. Something that I found particularly interesting was the large segmented table in the dining room which has an intricate and extremely clever mechanism to help it expand to accommodate more guests. There’s a small scale model so you can see how it works.

Before or after your visit to the house have lunch or a cream tea in the courtyard cafe. We can recommend the crab sandwiches.

Characters from Hartland Abbey’s past

The Stucley family’s ancestors include prominent politicians, courtiers and even pirates. Someone who’s history is explained in loving detail in an exhibition at the bottom of the house is Rev William Stucley. He was Sir Isaac Newton’s friend and biographer as well as a scientist and archeologist in his own right.

Rev Stucley theorised that the Milky Way was a collection of stars and that Stone Henge was not made by the Romans – as was commonly believed in the 18th Century – but by an earlier people. His theory that the stones were erected at around 500BC was a bit short of the mark. Knowledge of pre-historic times was limited back then! Regardless, he cemented Stone Henge’s place as a prominent historic site and saved it for future generations.

You can walk from one mile from Hartland Abbey down through the estate to Blackpool Mill – a rocky cove looking out over the Atlantic and Lundy Island. The rock formations here are incredible. There are also walks around the estate to find the gazebo, walled garden and woodland summer house. 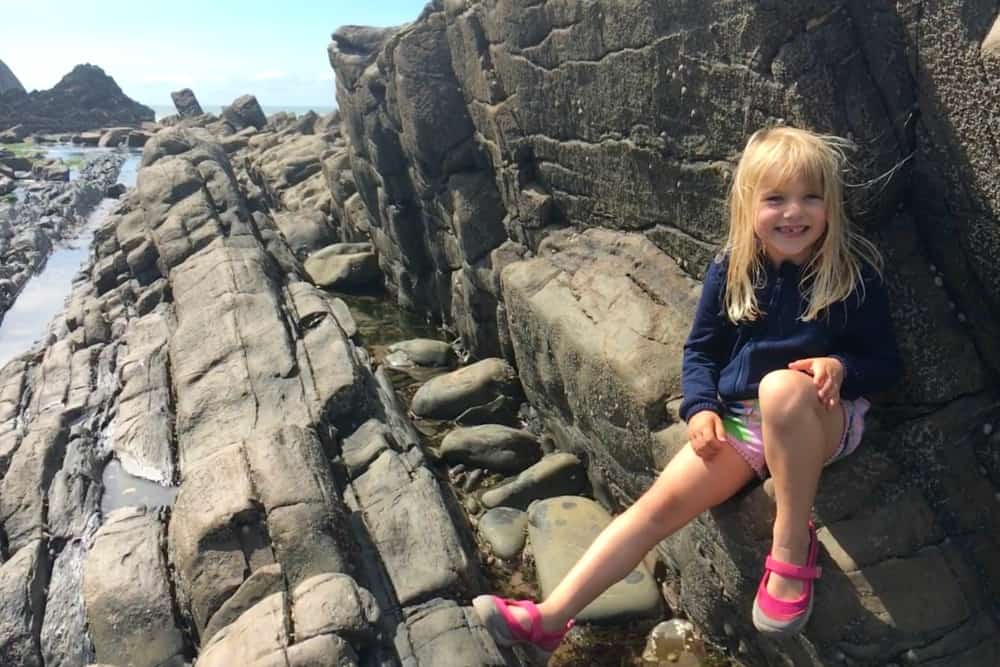 Along the way you pass by locations used in the filming of The Night Watchman, Sense and Sensibility and Top Gear in the past decade. Many other television programmes have been recorded around the estate and house over the years.

Dogs are welcome on a lead at Hartland Abbey and can go everywhere but in the house. They can also go on the beach throughout the year. 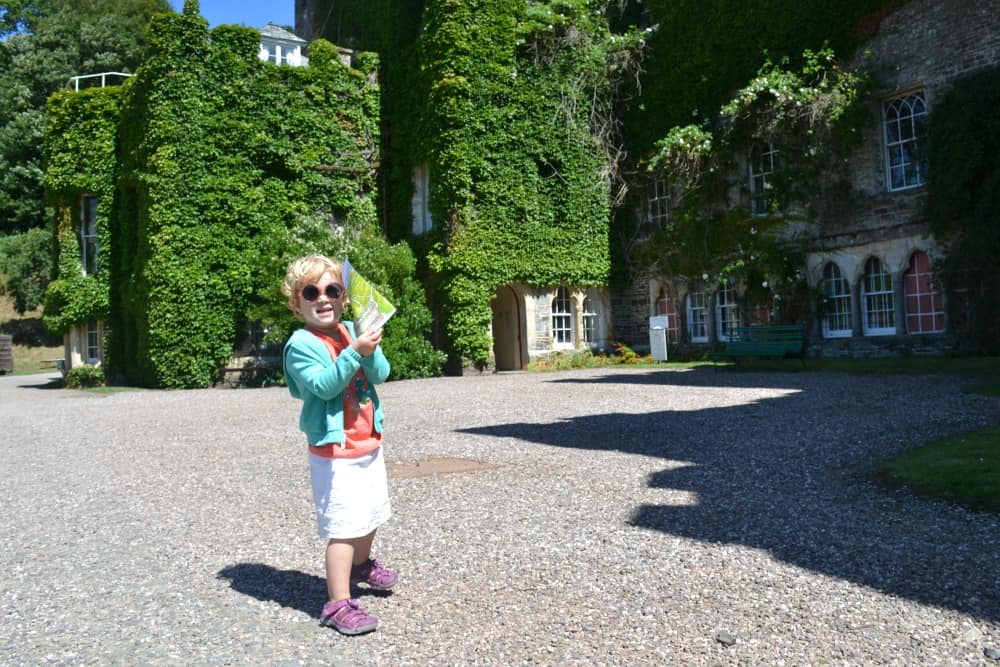 I took Baby into the house with Tin Box Grandma and Grandpa while Mr TB and Tot went for a walk with the dog. There’s not an awful lot in the house to keep young children amused. But if you have older kids who enjoy history then go for it. I really enjoyed looking around and finding out about the Stucley family.

The winding woodland paths are great fun for children of all ages to explore and there’s a nature trail you can pick up from the welcome hut to complete while exploring. It’s common to see buzzards, Roe deer and foxes if you are quiet enough.

In the field behind the house and car parking area there’s black sheep and donkeys. While they’re not there specifically for petting, the friendly donkeys may come over to say hello.

Blackpool Mill beach is an easy walk to do with children and they will be rewarded with rock pools to explore.

You can extend your time at Hartland Abbey into the evening by coinciding your visit with one of the outdoor theatre productions during the summer months. There’s an additional charge for theatre tickets.

Hartland Abbey is located on a small, windy road between Hartland Village and Hartland Quay. Much of the land between the house and the coastline is part of the estate including Hartland Quay itself. Pop the postcode into your SAT NAV to find the Abbey entrance and driveway: EX39 6DT.

When is Hartland Abbey open?

The Abbey and gardens are open from March until the end of September. A family ticket for two adults and up to three children costs £29. See the Hartland Abbey website for more information.

If you’re interested in other historic houses in Devon check out these posts: