Happy memories of amdram on the rally field

I was sad to hear the last surviving member of the Andrews Sisters, Patty, passed away this week.

Now you’re probably thinking that, being in my early 30’s, I’m a bit young to know who the Andrews Sisters were. Well – and here’s the Tin Box connection – I once made up one third of an Andrews Sisters tribute act at a concert held at a rally commemorating the 50th anniversary of VE Day. 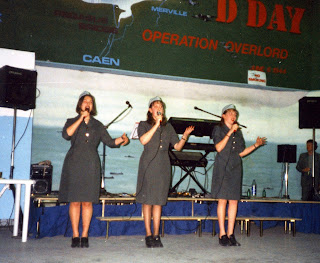 During the long weekend in 1995, we took over the Museum of Army Flying at Middle Wallop and held our own ‘Dugout Party’, with music and performances inspired by the end of the Second World War in Europe. That’s me on the far left.

It was just one of many amateur dramatic productions I recall from my childhood as a caravanner. If I dig deep enough into my memory I can also remember playing Jack, from Jack and the Beanstalk, one of the Blues Brothers, and a mermaid – all in skits to entertain fellow ralliers.
Taking part in these shows didn’t inspire me to pursue a career on the stage or audition for the X Factor. In fact, the less heard of my singing voice the better. However, it did give me some very fond memories and has definitely influenced my decision to caravan with my own family.
Speaking of which, baby Tin box is due next week!
Share